With unlimited heart to fight, Nodmai Nittayaporn Muay Thai training camp , the expected winner of Thai Life Tournament boxing 5 th in Lumpini Thai boxing TNG determined to show his form and can be overcome Petchdam P.Pirunrodtu Camp although the rival are not common and enter the match with great fighting. 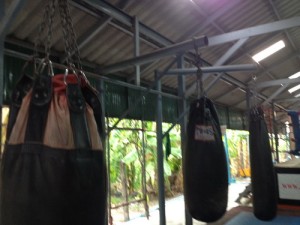 Nodmai A.Nittayaporn, the expected winner of Thai Life Tournament boxing 5 th have a playoffs match with Petchdam P.Pirunrodtu who show a good form by win this round too. They and not afraid each other and will fight on Saturday 28 June 2014 . The loser will fail. Nodmai confident he can use his skill to win Petchdam and not afraid of anyone because he come so far to fear then. Now he is not afraid anyone and believe people who enter in this match is not common but he will get the champion belt.

“Boat” Nattadet Washirattanawonh, a promoter of Petchwised at Radchadamnoun boxing stadium and Jao Muay Thai War at Aomnoi boxing stadium open his mind with Muay Siam reporter that the board and promotor’s meeting of Jao Muay Thai War on Aomnoi boxing stadium in the last match that Chanapetch 91 Rungrod to fight with GaoTam Rungprabat in Fug Tean 10th in Jao Muay Thai on Saturday 28th  June at Aomnoi already after Rattakhed was sold in the fight with Petchsinil but this is the outside match which is not mean. Gaotam get the point form the last match but he have to fight according the boxing program.

“After Rattakhed was sold in the fight with Petchsinil on 28  June , a promoter set the new match. The conclusion of meeting was sending Chanapetch to fight with Gaotam on 5th July  which is my responsibility. But this is the outside match that the boxer have to fight according the boxing program.. I believe Gaotam will enter the next round with Petchsinil if not have the accident occur with both of them” Boat said.