Nil Donmeung accept Kao AE Kret-Chaleonchai (Rajanond) who is the boxer in his team that is inferior to NeungLarnlek Chit-Meungnon.  The fight will be on day time that It would be the hard match of him. However ,he prepare for this case. It will be an exciting match although his boxer  will be the loser, he believe that.

After Hear-Shun Kreatpetch manage a fight between Koa Ae Kreatchareonchai and Neundlarnlek Chitmeungnon in Suk-Muey Thai Jed Si match on Sunday 21st December 2014 at Vicmorchit Jed Si boxing ring.  Latest Nil Donmeung accept  Kao AE Kret-Chaleonchai (Rajanond) who is the boxer in his team that is inferior to NeungLarnlek Chit-Meungnon. Because his boxer seldom fight on day time , so he need to prepare to solve about  this. Nil Donmeung believe if his boxer is not be knocked out in the early round of the match his boxer  will get advantage in the last round. He said “His boxer want to be a famous boxer”. 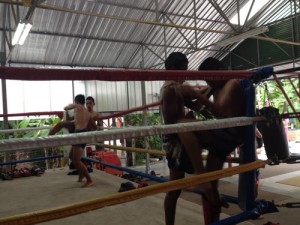 He said that  His boxer had a work hard for this match because  he is inferior to his competitor in experience and movement. “It will be an exciting and  impressing fight for sure. If the competitor can’t  win by knock out his boxer,  His boxer might be the winner instead”, Nil Donmeung said.