“Mr.Pu Khukhan” Mr.Nattipong Kampong, a manager of P.Penapat comes to apologies Muay Thai fans and Pol.Lt.Col. Thedsak Nontaoanpipat and Jocho T.Pran 49 in case of boxing fan criticize a boxing skill of Superjeng P.Penapat that is inappropriate. He want all parties understand that this is a fighting game on stage but if all that is not  appropriate, he ready to apologize and will not let this things happen anymore.

After Superjeng P.Penapat  knockout Jocho T.Pran 49 in round 4 and was criticize by boxing fan that Superjeng take the opportunity and not have a kindness in that time while the committee, Yodying Kesornmala counting Jocho to eight and hand to Superjeng fight which is the few second. When the committee hand down, Jocho will turn back. This is the really second. “Mr.Pu Khukhan” Mr.Nattipong Kampong, a gym manager confirms that Superjeng is a good boy. He will not aggravate to his rival.

“I have uneasy feeling because many people criticize I have to apologized Muay Thai fans, Pol.Lt.Col. Thedsak Nontaoanpipat, aT.Pran 49 manager and Jocho. In fact, Superjeng is not a bad guy. He never want aggravate to his rival but this is the second opportunity and I confirms this things will not happen anymore” Mr.Pu said. 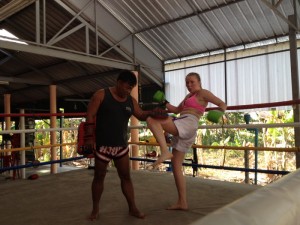 END_OF_DOCUMENT_TOKEN_TO_BE_REPLACED

The big match on 28 April , Pakorn Sandchai P.K. Muay Thai gym fight with Singdam again after have a list but they did not meet because Singdam withdraw from this fight. Pakorn wait and training for this fight. He annouce that not fear and ready to fight with senior boxer fully in Lumpini Champions Kregkrai on the opening match was organized by the “Mr.Nao” Wachirattanawong. This is the big match in history. 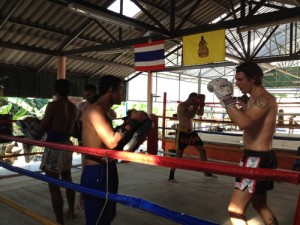 Have a chance to meet Pakorn PK Sangchai Muay Thai gym. He is confident to fight with Singdam Kiat Mu 9, a senior top boxer on the Lightweight Championship Lumpini on RamInTra stadium (Lumpini RamInTra) in the opening match was organized by the “Mr.Nao” Wachirattanawong on April 28. They will meet in 132 pounds match.

Pakorn reveals this body is very good. His training boxer at gym is very skilled boxer such as Sandchai P.K.Sandchai Muay Thai Gym, Sangmanee S.Teanpor. All of them had a fight at 28 February. He said not fear about the fight with Songdam althought his body is unfavorable. He is confidence to overcome and get the championship belt.

Muay Thai is a national game of Thailand today, but it was not a game when it was originated in the ancient times. It was originated to fight against the opposite army in the fight, but nowadays, it has been used as a national game, self-defend technique, and a fight art, which is being taught to Thai army as well. Learning this art gives you several benefits, such as self-protection, a chance of entry in Thai’s games, and a chance of entry in Thai army, because if you already know Muay Thai then you may be able to pass all physical entrance tests, as it makes you stronger and harder.

END_OF_DOCUMENT_TOKEN_TO_BE_REPLACED

“Nong Boat” Nattadet Washirattanawong guarantee the training of SamDee Petchyindee Academy that ready to fight with Petchlukfang C.Pinnarat in the important match of Muay Thai War on 22nd April at Imperial MuayThai stadium but he will not neglect because is it he day fight and be unfavorable 2 pounds is not the easy fight.

Muay Thai War on 22 April at Imperial stadium, the important match of Fried chicken million baht tournament boxing of SamDee Petchyindee Academy with Petchlukfang C.Pinnarat Muay Thai training camp in 109-11 pounds. Nong Boat reveal that 3D training for this fight very good but he will not neglect because he is unfavorable 2 pounds and his body is small and this is a day fight but he confirm this fight is very great match.

“In this fight, SamDee training so hard and his body is perfect but I still worry because of this is the day fight and he is unfavorable 2 pounds and his body is small. Although he have many experience but this fight is not easy. I confirm this fight is very great match and impress boxing fans. You can follow and cheer him at this match” Nong Boat said.